Why Hometown Cha-Cha-Cha is the new K-drama obsession

MANILA, Philippines — Hometown Cha-Cha-Cha stars and director laid down what it is to love about the South Korean series.

The romantic-comedy series is the new K-drama obsession this year, currently sitting at the top spot in Netflix Philippines. It stars Shin Min-a, Kim Seon-ho and Lee Sang-yi and is helmed by director Yu Je-won who is behind Oh My Ghost and Tomorrow With You.

Hometown Cha-Cha-Cha, which is a remake of 2004 South Korean film Mr. Handy, Mr. Hong, tells a story of Seoul City girl Hye-jin (Shin Min-a) who arrives at the seaside village of Gongjin and what unfolds upon her arrival. She meets Du-sik (Kim Seon-ho), the small town’s all-around guy — real-estate agent, barista, delivery boy and bar singer. The unlikely pair will grow fond of each other even after finding a lot of differences in one another at first.

The feel-good vibes and relatable characters have made the series more appealing to the audience.

“This drama is not about big events, it’s about the small stories in our daily lives and emotional changes. It’s about healing and warmth. That is the message we want to send to our audience. It’s entertaining and the scenery is breathtaking,” said director Yu Je-won during Netflix’s recent virtual media conference.

Actor Kim Seon-ho added, “All of the scenes are beautiful and even though the incidents are not particularly special, these incidents could happen to any of us and you can experience healing. How the villagers of Gongjin react can be appealing to the audience.”

Actress Shin Min-a also noted how the characters have established “a great chemistry which I think can be an entertaining point.”

Hometown Cha-Cha-Cha is a perfect series to watch on a weekend after a long week of work and if you want to relax, said Lee Sang-yi, the rival love interest in the K-drama. “There are elements that are similar to a documentary and there are elements that have a dramatic side. I am sure you’ll be able to get good sleep after watching this comfortable drama.”

Shin Min-a, on the other hand, finds it easy to relate to her character as the “pragmatic dentist” because of their similarities in real life.

“When I first read the script, I thought that Hye-jin and I share a lot of similarities. It was easy for me to immerse myself into Hye-jin’s emotions. I think Hye-jin is a bit more honest about her feelings and what she’s feeling. She can be more direct, but if you look into the heart of Hye-jin, there are a lot of things that I share in common with her,” she shared.

Kim Seon-ho, on the other hand, is particularly interested in Du-sik’s realtor license. Du-sik is an unemployed jack-of-all-trades who holds a list of licenses. “A lot of people are interested in real estate these days. Du-sik is literally capable of everything and he has a realtor license. One of his licenses certifies him as a professional fruit plater, so he lays out fruit on a plate.”

He also thinks that it “would be really nice if women who watch the drama would have a boyfriend like Du-sik.” 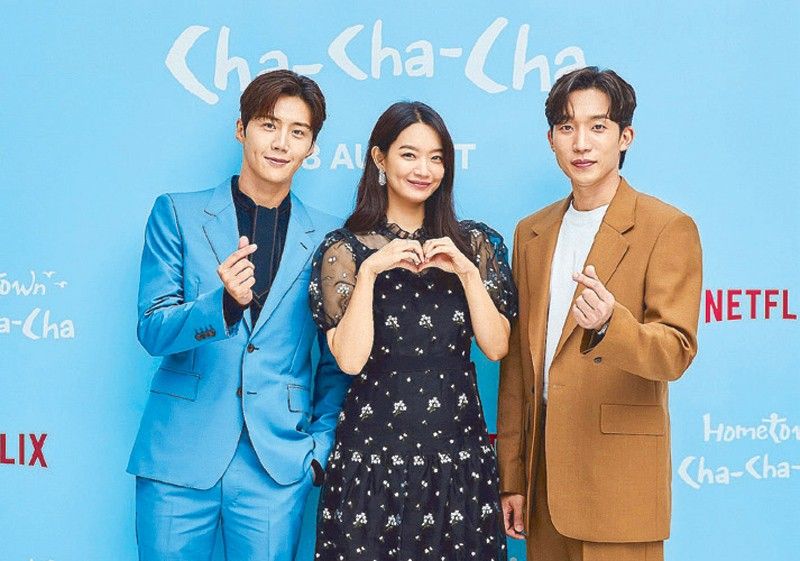 Here are the excerpts from the interview with the main cast members during Netflix online media conference (translated in English):

What makes you drawn to the story of Hometown Cha-Cha-Cha?

Kim Seon-ho: “This is a truly heartwarming story and I felt it was really human. I play the role of someone who is unemployed but capable of everything. I wondered what I could bring to the character and I felt like it was really fun. When I read the script I felt like it was heartwarming and I was drawn to it, I really wanted to be a part of it.”

Shin Min-a: “The script was really fun and I wanted to return to the rom-com genre. While I was waiting to find a rom-com I wanted to return through, I came across the script and it was so well-written with a solid storyline and a lot of wonderful characters. I was drawn to the character Hye-jin.”

Lee Sang-yi: “I was also very drawn to the fun, intriguing story. I know a lot of people who are going to live in Jeju Island and that is the trend right now. That’s exactly how I felt when I read the script. I felt like I was transported to this village. Of course, being able to act alongside Kim Seon-ho and Shin Min-a was also amazing.”

How was the chemistry between Shin Min-a and Kim Seon-ho on set?

Shin Min-a: “It was really good. I know there were high expectations even before we started filming, but I didn’t feel a lot of pressure. I really enjoyed acting on set with Kim Seon-ho. He’s really a good person and a comfortable person to be around. I think our good chemistry and flexibility were shown through our acting.”

Kim Seon-ho: “I totally agree with Shin Min-a. I was talking about this with Lee Sang-yi as well. Shin Min-a has a good character and she’s really nice. She’s a comfortable person to be around.”

How does it feel to be called the Sikhye Couple (Sikhye is a traditional Korean rice punch and the nickname comes from their individual names — HYE-jin and Du-SIK)?

Kim Seon-ho: “I think the rhythm in which we deliver our lines is something that can be appealing to viewers. I think the relationship between the two characters will be very interesting.”

Shin Min-a: “Hye-jin and Du-sik bicker and they don’t like each other at first. At the same time, I think the audience will see that they are alike in some ways. I think that will be something to look forward to.”

How did you prepare for your respective roles?

Kim Seon-ho: “Because Chief Hong does so many different things, I had to set apart some time to learn all of his abilities. I had to learn how to surf and how to make coffee as a barista. I had to maintain a certain balance since he’s unemployed but he has a lot of handy talents.”

Shin Min-a: “I think Seon-ho had to prepare the most. For me, since I play the role of a dentist, I visited my dentist. I had my teeth looked at and tried to observe my dentist’s facial expressions. I also tried to spend some time understanding the dentist’s feelings.”

Lee Sang-yi: “I watched a lot of TV since I play the role of a star producer. I watched a lot of producer Na Young-seok’s programs because that’s the kind of role I’m portraying, as well as producer Kim Tae-ho (works) who is the producer of Hang Out with Yoo. I tried to observe them and I noticed that they are not that talkative on set, they are usually quietly observing in the back. Aside from that, I tried to become close to my co-stars since chemistry needs to be translated on the screen.”

What was it like filming with the beautiful scenery?

Lee Sang-yi: “The set is amazing and we’re shooting in an area that’s a bit far away from Seoul. When I return home to the city from the set, I really miss it. I miss the staff and my co-stars. I would grab my phone to talk to them or send them messages. As for memorable stories on set, there was a scene at the lighthouse and some people saw us shooting there. They came up to us but mentioned the wrong title.”

Shin Min-a: “Since we’re shooting by the seaside, I’m also really looking forward to watching the beautiful scenery. However, we couldn’t control the climate and I remember it being really hot. Sometimes while I’m on set I would be exhausted, but I would look at the ocean and hear the waves and feel comforted. There are some challenges, of course, in the process of filming but the scenery is very soothing and gives us energy.”